At the Uffizi, a new room welcomes the “Tondo Doni” and the “Madonna del Cardellino” 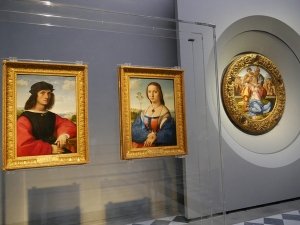 In the new Room 41 of the Uffizi, Michelangelo’s Tondo Doni is placed near the Masterpieces of Agnolo Doni and Maddalena Strozzi painted by Raffaello

Florence – Eike Schmidt, Uffizi’s director defines the room in which the “eleven real bombs of the history of art” are concentrated. And in fact, set in the center of the huge wall “porthole” soft gray, in room number 41 of the west corridor, the famous Tondo Doni by Michelangelo – first in the Gallery of Statues and Paintings – produces a beautiful effect .
Next to the painting, one of the most emblematic of the Italian sixteenth century, which lays the foundations for what will be the mannerism, the Raphael’s Madonna del Cardellino rises – removed from the first floor where it was exhibited since June 2012 – and other masterpieces of ‘Urbinate, like the portraits of Guidobaldo da Montefeltro and Elisabetta Gonzaga, those of Agnolo and Maddalena Doni, and the San Giovannino.

And so finally the masterpiece of Buonarroti preserved at the Uffizi will be able to dialogue with portraits – come from Palazzo Pitti – of the spouses who had commissioned (and paid for), probably for the birth of their daughter Maria, the Michelangelo round.

As explained by Antonio Godoli, curator of the architectural heritage of the Uffizi, responsible for the project together with Nicola Santini, “The main paintings are set up inside glass cases that allow you to observe them at close range”.

Aimed at capturing the diversity of the artistic voices and the exchanges between Raphael and Michelangelo, which were simultaneously in Florence from 1504 to 1508, the exhibition also aims to document the reaction of the Urbinate to Leonardo da Vinci, whose works will be exhibited. shortly in the nearby room 35.

“The new installation – underlines the director of the Uffizi Galleries, Eike Schmidt – replaces the paratactic exhibition of isolated and fetishized masterpieces the principle of dialogue between the works, the artists and their clients, and invites viewers to discover and retrace the exchanges artistic works among the greats of the past. For this reason a third personality enters the stage, which thanks to the comparison with Raffaello regains his own solo voice “. This is Fra ‘Bartolommeo, a close friend of Sanzio, with whom an intense and rich exchange of consequences is established, which the visitor will now be able to retrace through works like Porzia and the Visione di San Bernardo always exhibited in room 41.

These new movements that carry out a revolution in reverse – through a return to the origins that re-establish some important collections collectives – will bring to Palazzo Pitti important restitutions including the Nativity of Francesco Salviati, who had been transferred to the Uffizi in the fifties of the twentieth century.
The Palatine Gallery, the most important group of works by Raphael in the world, which, in the future, will host twelve masterpieces of Urbino instead of 11.
Thanks to the transfer from the Uffizi of the Ritratto di giovane with the apple (attributed to Francesco Maria della Rovere), in fact, the portraiture of the artist’s last period in Urbino will also be documented at Palazzo Pitti. In the Sala di Saturno of the Galleria Palatina – which is thus preparing to become a sort of permanent exhibition of paintings by Raphael – the Head of Mary Magdalene by Pietro Perugino, master of Raphael, and the Portrait of Leo X, a work by Urbinate, currently under restoration at the Opificio delle Pietre Dure.
This return to style will assist in reuniting with the other great papal portrait of Raphael, Julius II, who will arrive at the Galleria Palatina from the Uffizi Gallery.

Would you like to own one of the two works?

A painting for Pope Francis

The short movie made by Sky about the painting by “Caravaggio” for...
Scroll to top

This site uses cookies. By continuing to browse the site, you are agreeing to our use of cookies.

We may request cookies to be set on your device. We use cookies to let us know when you visit our websites, how you interact with us, to enrich your user experience, and to customize your relationship with our website.

Click on the different category headings to find out more. You can also change some of your preferences. Note that blocking some types of cookies may impact your experience on our websites and the services we are able to offer.

These cookies are strictly necessary to provide you with services available through our website and to use some of its features.

Because these cookies are strictly necessary to deliver the website, refuseing them will have impact how our site functions. You always can block or delete cookies by changing your browser settings and force blocking all cookies on this website. But this will always prompt you to accept/refuse cookies when revisiting our site.

We fully respect if you want to refuse cookies but to avoid asking you again and again kindly allow us to store a cookie for that. You are free to opt out any time or opt in for other cookies to get a better experience. If you refuse cookies we will remove all set cookies in our domain.

We provide you with a list of stored cookies on your computer in our domain so you can check what we stored. Due to security reasons we are not able to show or modify cookies from other domains. You can check these in your browser security settings.

These cookies collect information that is used either in aggregate form to help us understand how our website is being used or how effective our marketing campaigns are, or to help us customize our website and application for you in order to enhance your experience.

If you do not want that we track your visist to our site you can disable tracking in your browser here:

We also use different external services like Google Webfonts, Google Maps, and external Video providers. Since these providers may collect personal data like your IP address we allow you to block them here. Please be aware that this might heavily reduce the functionality and appearance of our site. Changes will take effect once you reload the page.