I want to tell you one of the best moments of my life: on May 30, 2018 I had the privilege of a private meeting with Pope Francis! A meeting at “Casa Santa Marta”, lasting 20 minutes, lived with great intensity and an amazing emotion.

The prestigious occasion was created following thanks to the pictures realyzed  for the art film ‘Caravaggio, the soul and the blood’ produced by Sky and Magnitudo Film in collaboration with Vatican Media, which was a great success with the public and critics adds Sky art films dedicated to the great Italian artists known and admired all over the world such as “Raphael – The Prince of the Arts” and “Michelangelo – Infinity”, in October in the cinemas, which sees the collaboration of both Vatican Media that of the Vatican Museums. The Bottega Tifernate has worked in both projects, making copies of the paintings for fictional scenes.

I was able to explain to the Holy Father the pictography technique, how we work to build a creation, the effort we use to rediscover ancient techniques.

We talk in front of an canvas reproduction by Caravaggio, “The Vocation of St. Matthew” made for the wall of the hall of “Casa Santa Marta”.

The work was started in February and carried out with more painters to be on time with the expiration date. The processing took place through the use of techniques and materials used by the artist for the original. 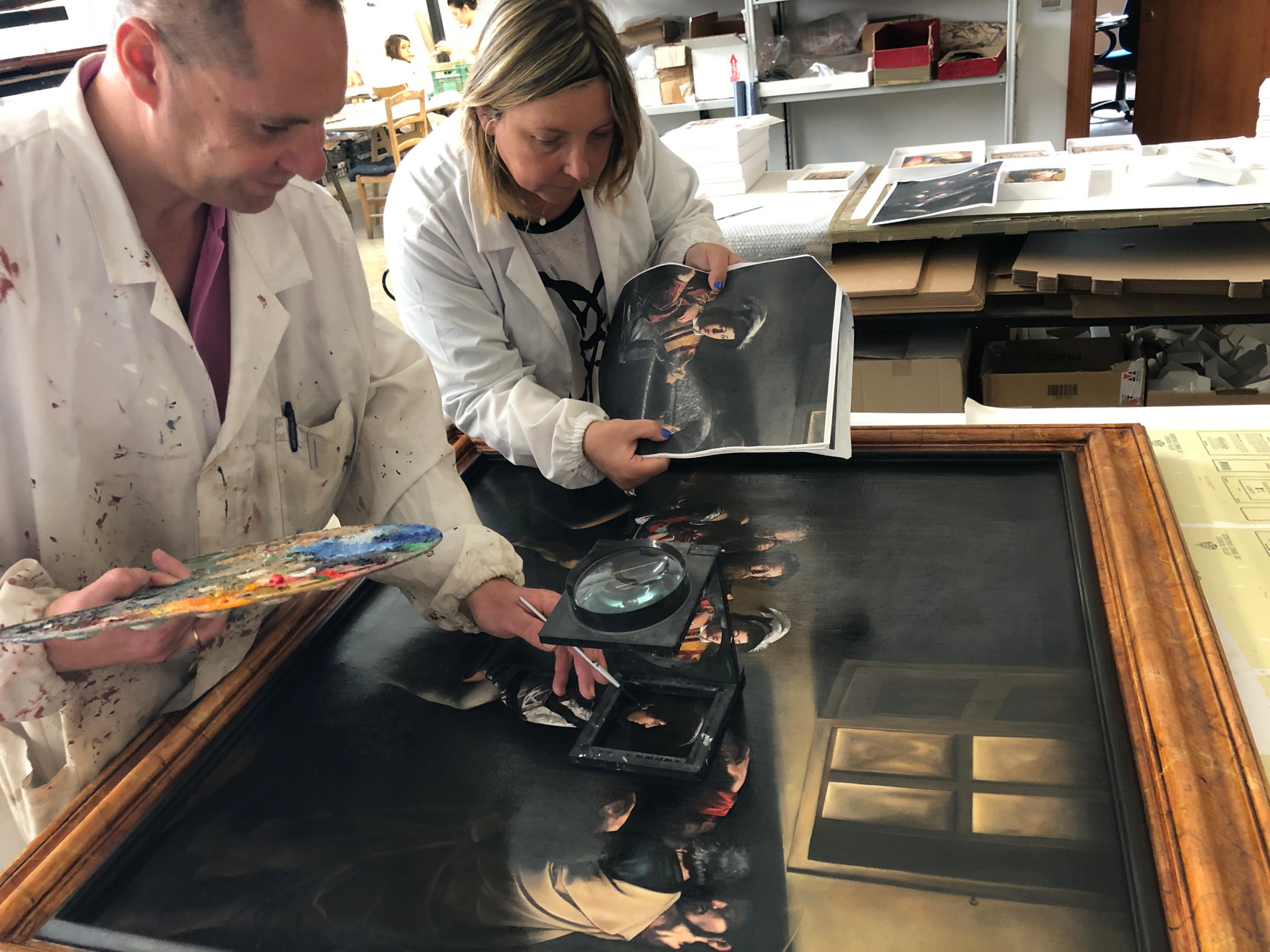 We used the white lead to give the whites an unmatched brilliance (this substance repels the light more than any other color) and we have applied the blacks in several layers according to its way to make them even deeper.

Thanks to the precious availability of the managers of San Luigi dei Francesi, we were able to work inside the Cappella Contarelli, in front of the original painting: 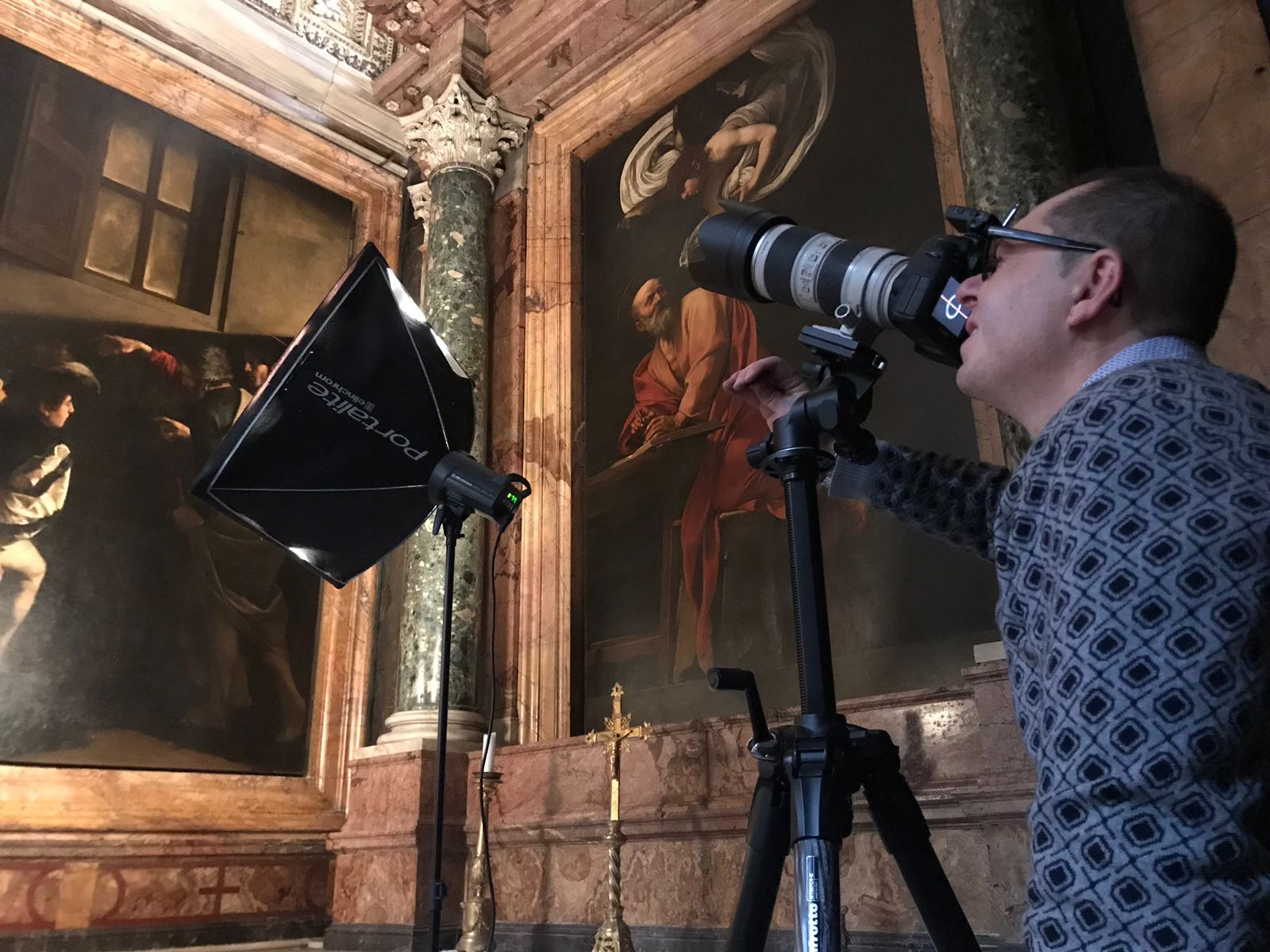 Then, during the painting process, it was possible to proceed with a detailed comparison of the copy and the original in the same lighting conditions. 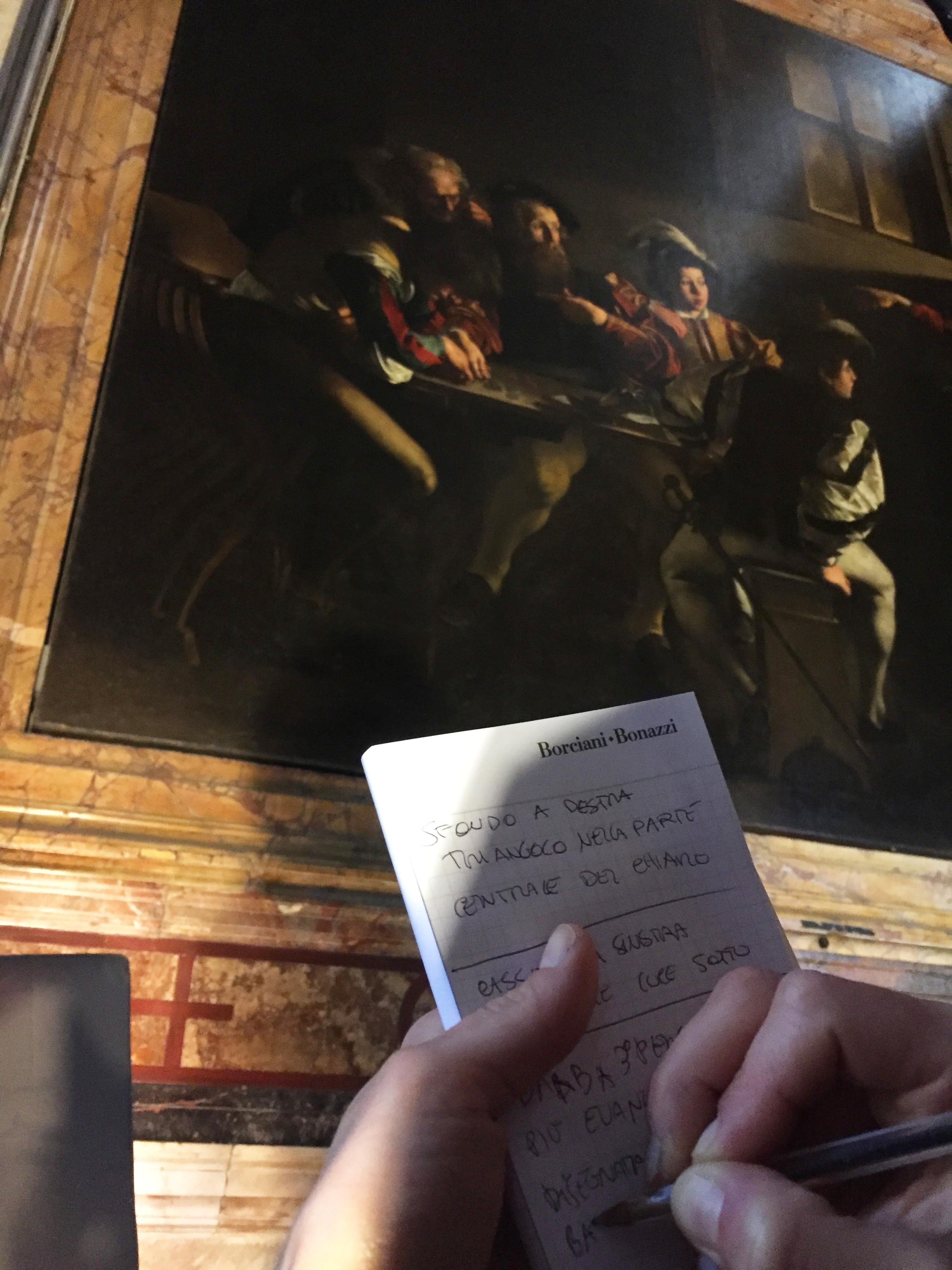 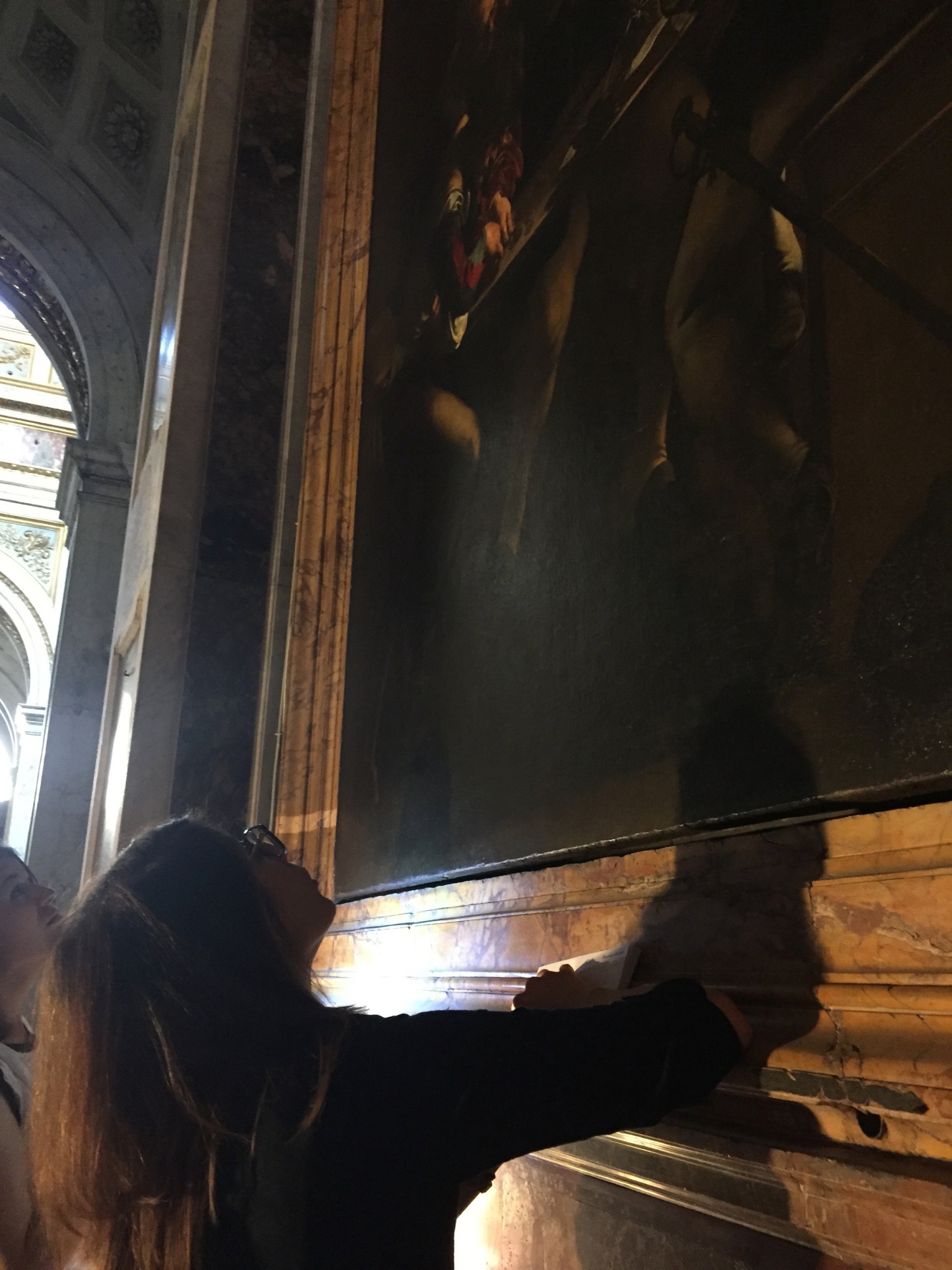 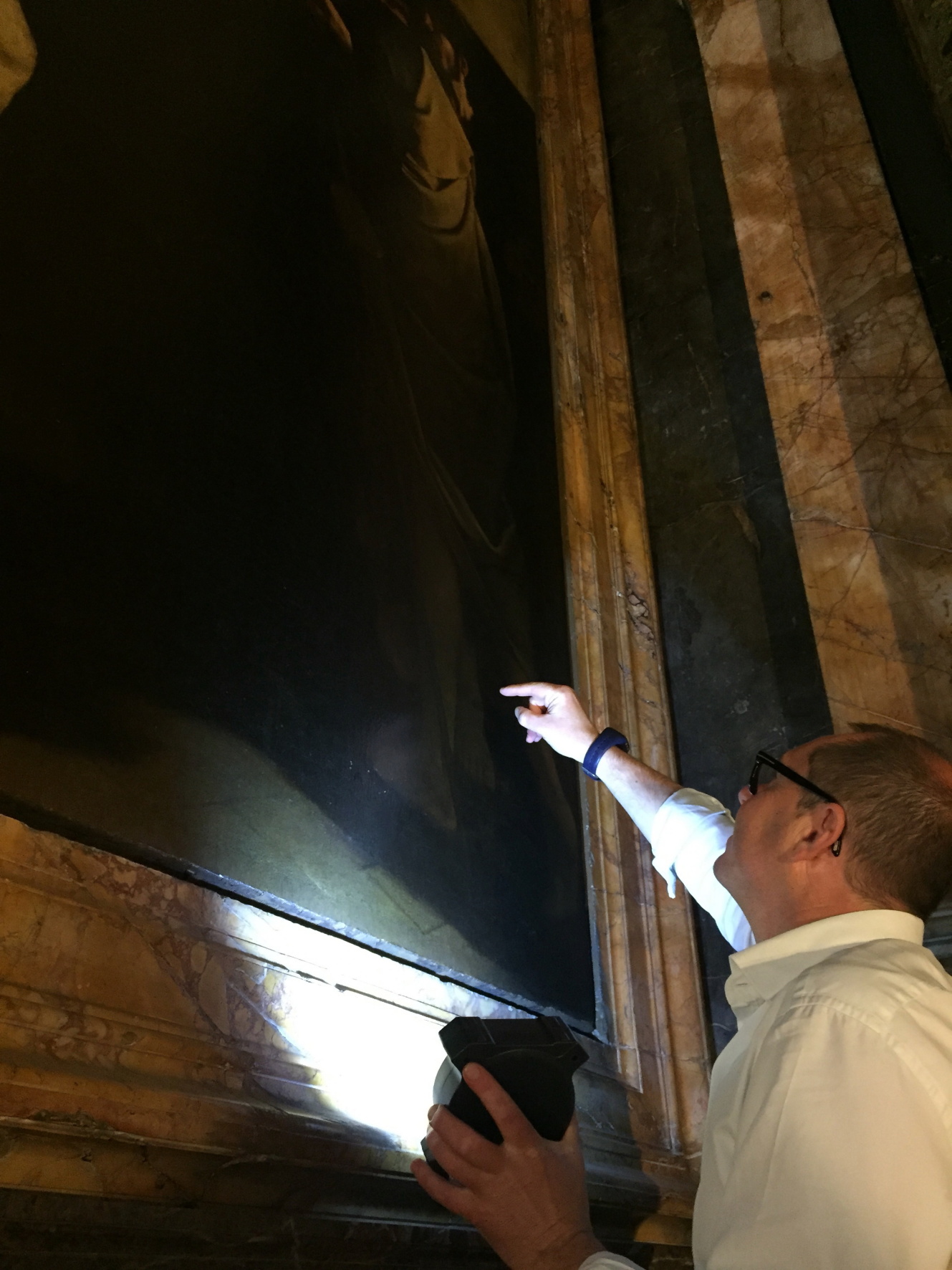 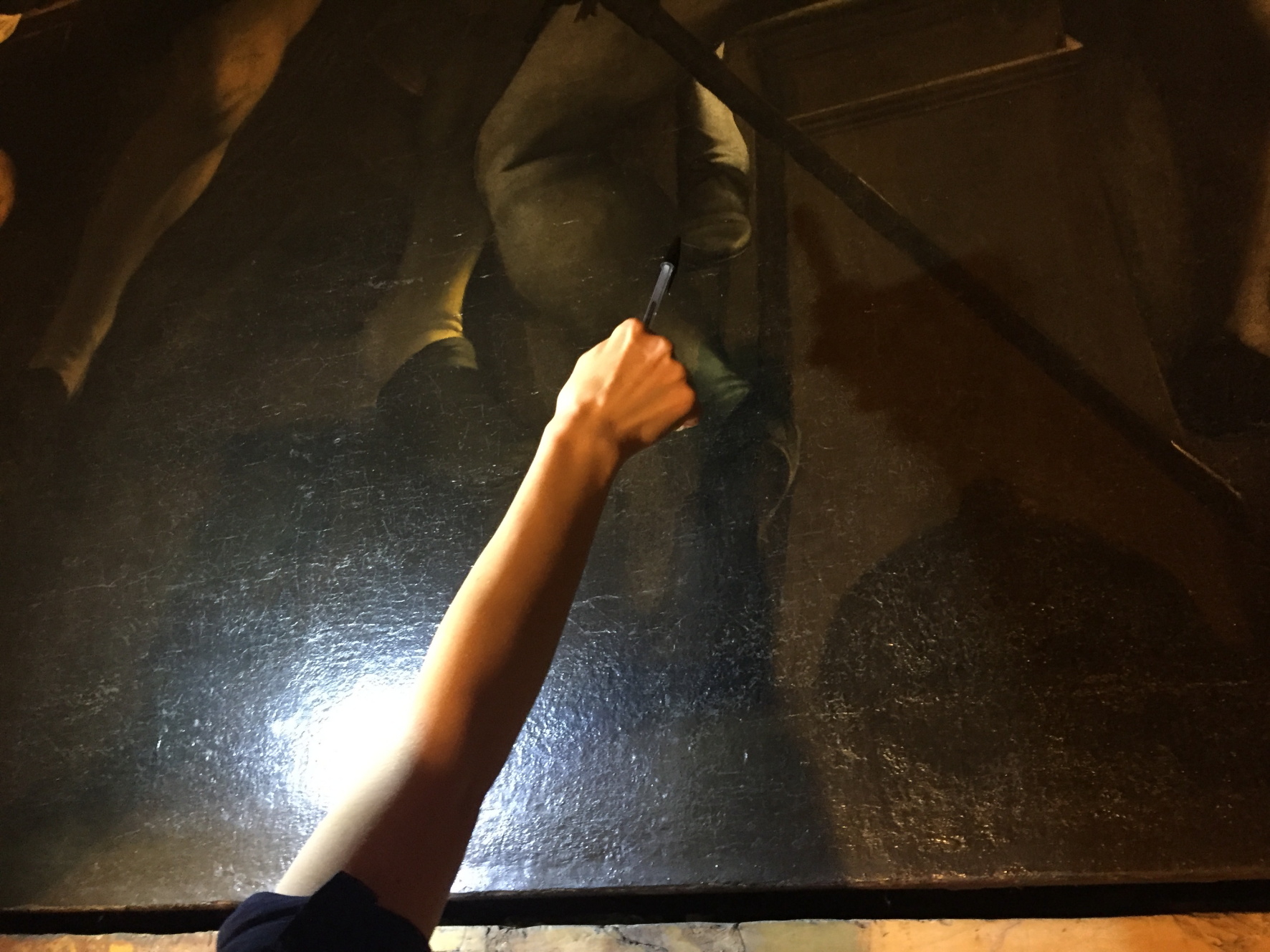 This possibility, allowed us to verify not only the details and shapes but all the chromatic differences that were adjusted on the same place. 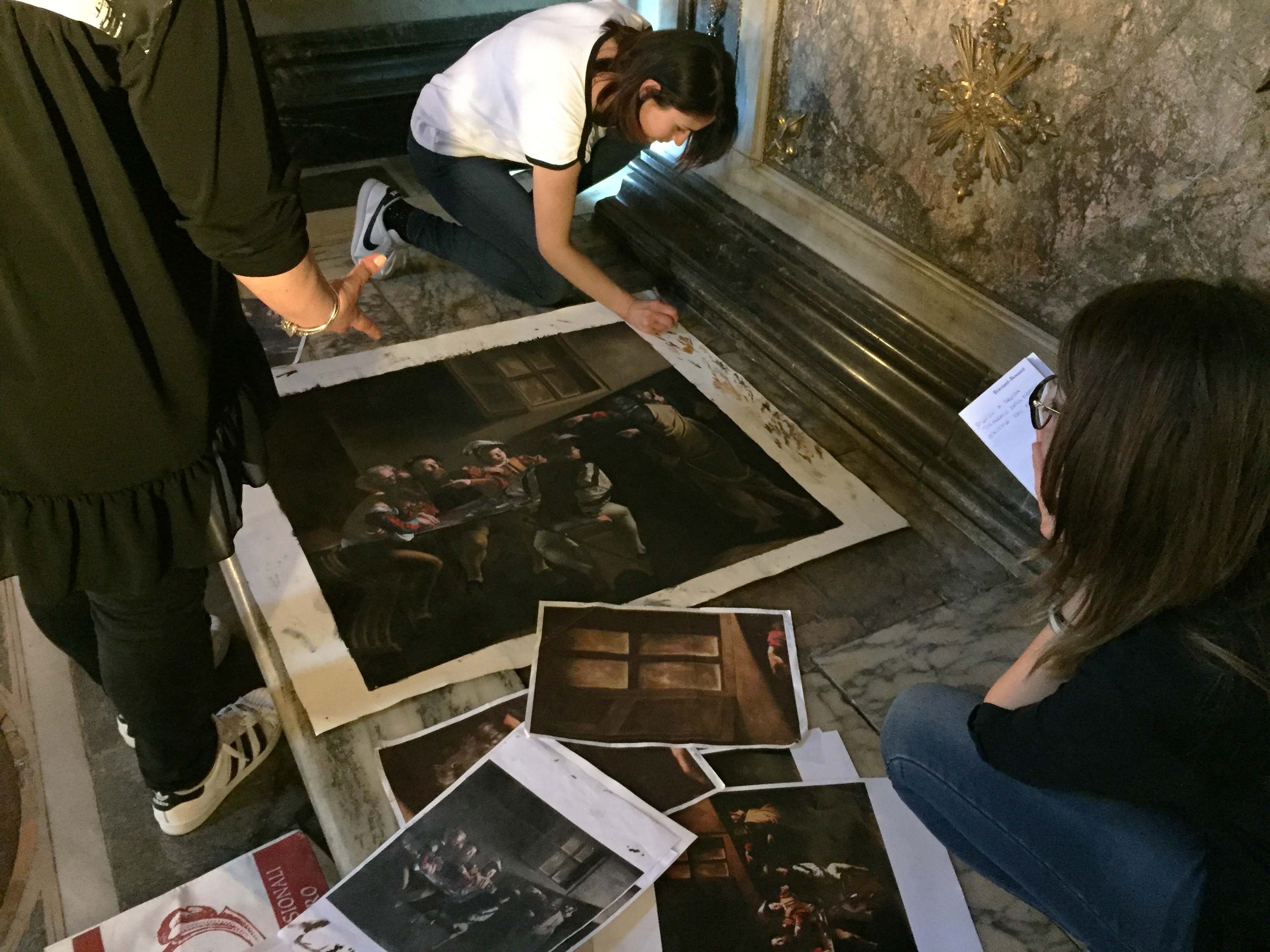 In this way, an exceptional result could be achieved and the picture, albeit in scale, allows you to enjoy the emotions you experience in front of a masterpiece of this magnitude. 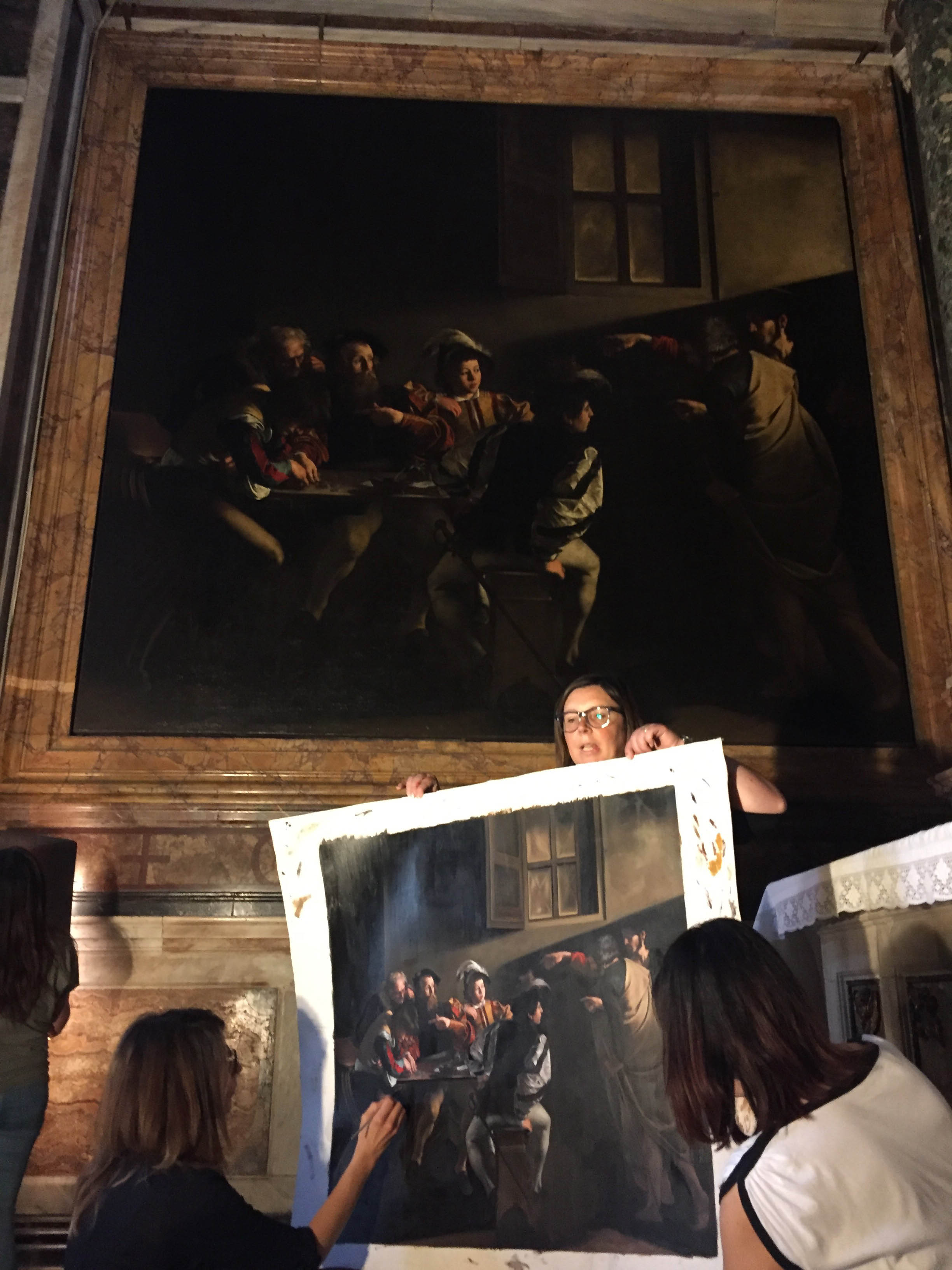 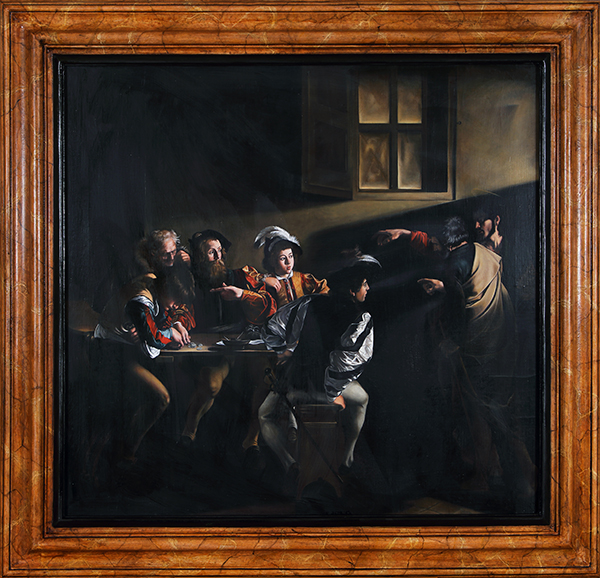 Pope Francis has always had a predilection for Caravaggio, and in particular for the Vocation of St. Matthew, which he went to contemplate in the Church of San Luigi dei Francesi ever since he was a cardinal in Rome. A framework that also contains the meaning of the “motto” he chose for his Pontificate:

I saw in the eyes of the Holy Father a wonder and a sincere joy in admiring this unexpected gift:

his simplicity, the charisma he emanates, left me a great gift, a deep enrichment that has changed me, forever … 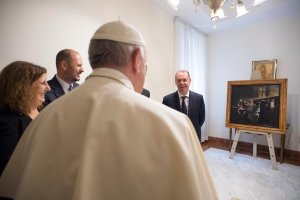 … and a feeling that my studies, the sacrifices and the experiences lived with Francesca, Romolo and all our team working in order to recreate in the most scientific way possible any work of art, have reached the pinnacle of recognition …

The Pope who has at his disposal the greatest masterpieces that humanity has ever known, wanted to possess a painting located in a place from which it is difficult to move it. The only way to taste the emotion and the amazement that it arouses, was to have a copy but not a simply copy of it:

it must evoke the emotion one feels in front of the original: it had to be recreated working on the meaning that the artist wanted to communicate to the spectator.

This shows us that the recovery of artistic memory makes sense: recreating a work that could be stolen or disappear due to exceptional events, has a high cultural value but also historical and artistic value. When I began my studies in 1990, nobody thought to the usefulness of pictography technique but today, we have numerous examples that can testify to the opposite. We will continue on the path taken with one more reason in the heart to believe that reason it is just the right one. 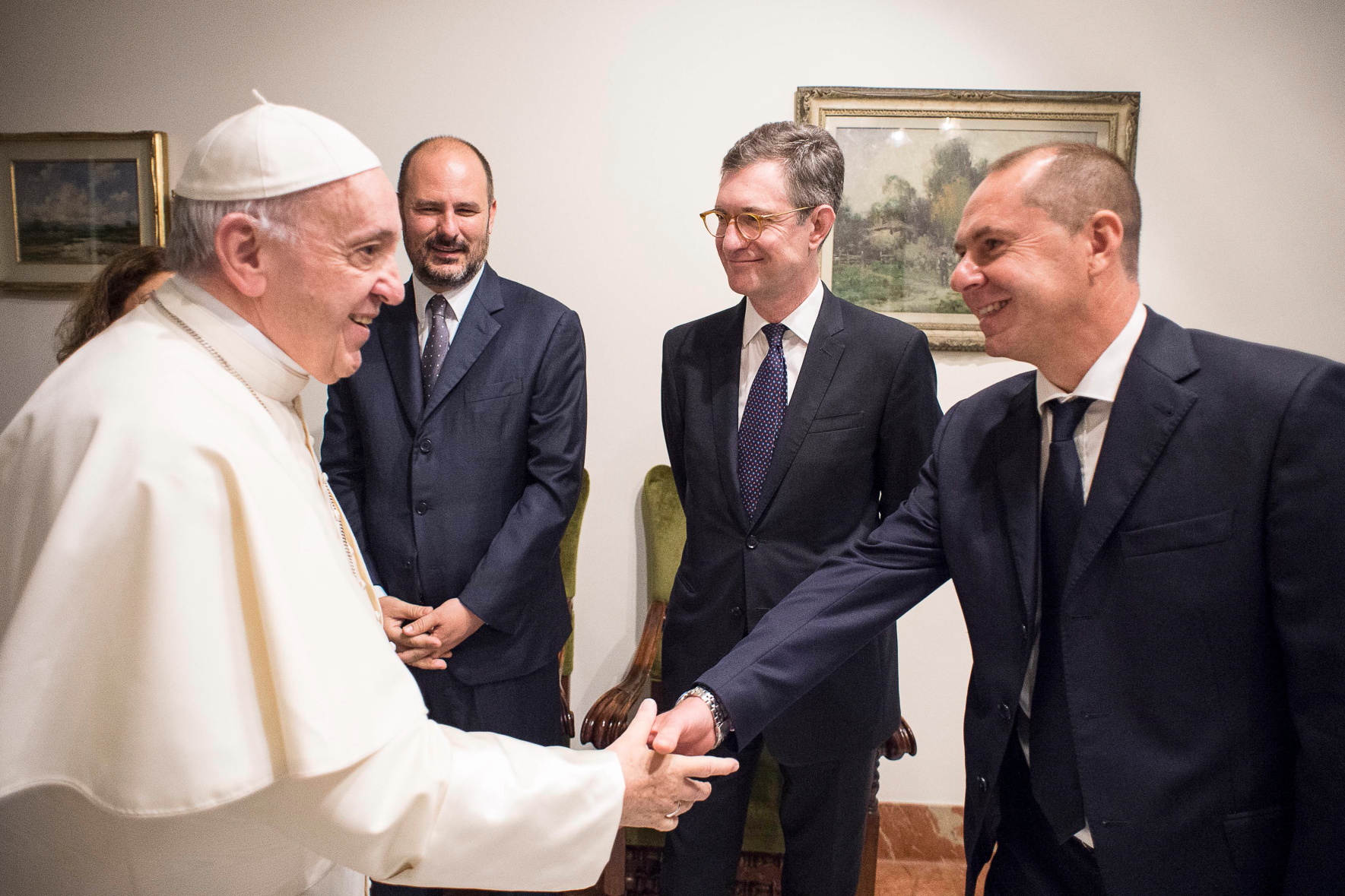 Want to join the discussion?
Feel free to contribute!

This site uses Akismet to reduce spam. Learn how your comment data is processed.

A “Caravaggio” for Pope Francis

At the Uffizi, a new room welcomes the “Tondo Doni” and the “Madonna...
Scroll to top

This site uses cookies. By continuing to browse the site, you are agreeing to our use of cookies.

We may request cookies to be set on your device. We use cookies to let us know when you visit our websites, how you interact with us, to enrich your user experience, and to customize your relationship with our website.

Click on the different category headings to find out more. You can also change some of your preferences. Note that blocking some types of cookies may impact your experience on our websites and the services we are able to offer.

These cookies are strictly necessary to provide you with services available through our website and to use some of its features.

Because these cookies are strictly necessary to deliver the website, refuseing them will have impact how our site functions. You always can block or delete cookies by changing your browser settings and force blocking all cookies on this website. But this will always prompt you to accept/refuse cookies when revisiting our site.

We fully respect if you want to refuse cookies but to avoid asking you again and again kindly allow us to store a cookie for that. You are free to opt out any time or opt in for other cookies to get a better experience. If you refuse cookies we will remove all set cookies in our domain.

We provide you with a list of stored cookies on your computer in our domain so you can check what we stored. Due to security reasons we are not able to show or modify cookies from other domains. You can check these in your browser security settings.

These cookies collect information that is used either in aggregate form to help us understand how our website is being used or how effective our marketing campaigns are, or to help us customize our website and application for you in order to enhance your experience.

If you do not want that we track your visist to our site you can disable tracking in your browser here:

We also use different external services like Google Webfonts, Google Maps, and external Video providers. Since these providers may collect personal data like your IP address we allow you to block them here. Please be aware that this might heavily reduce the functionality and appearance of our site. Changes will take effect once you reload the page.